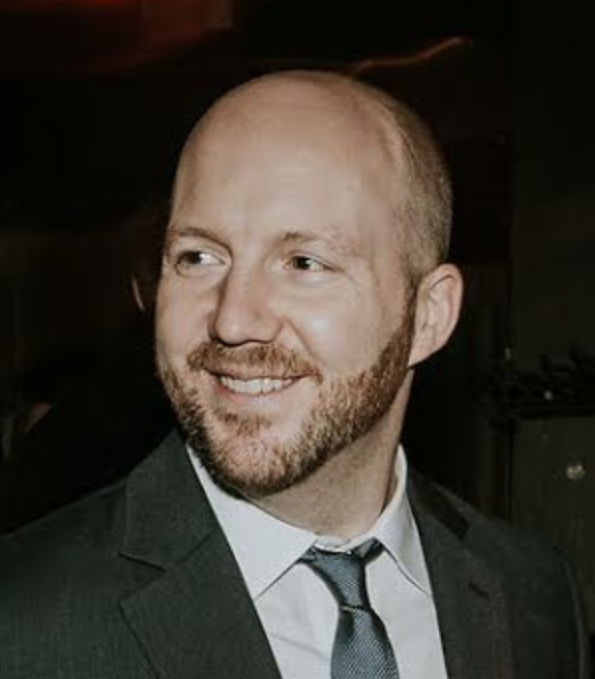 Last week’s post about 15.1 was a hit, so I’m back with 15.2 and it’s bigger and better. First off, we’ve got a treasure trove of new data. I collected all of the profile stats from 245,000 2015 Open athletes. Others have done interesting things with the leaderboard stats, but I don’t think anyone other than crossfit.com has all the profiles. I’ll weave that in with the WOD reports, but for starters, it gets it own post :

What’s normal (or top 5%) for a CrossFit athlete?

follow me @swiftsam for weekly updates as the Open continues. 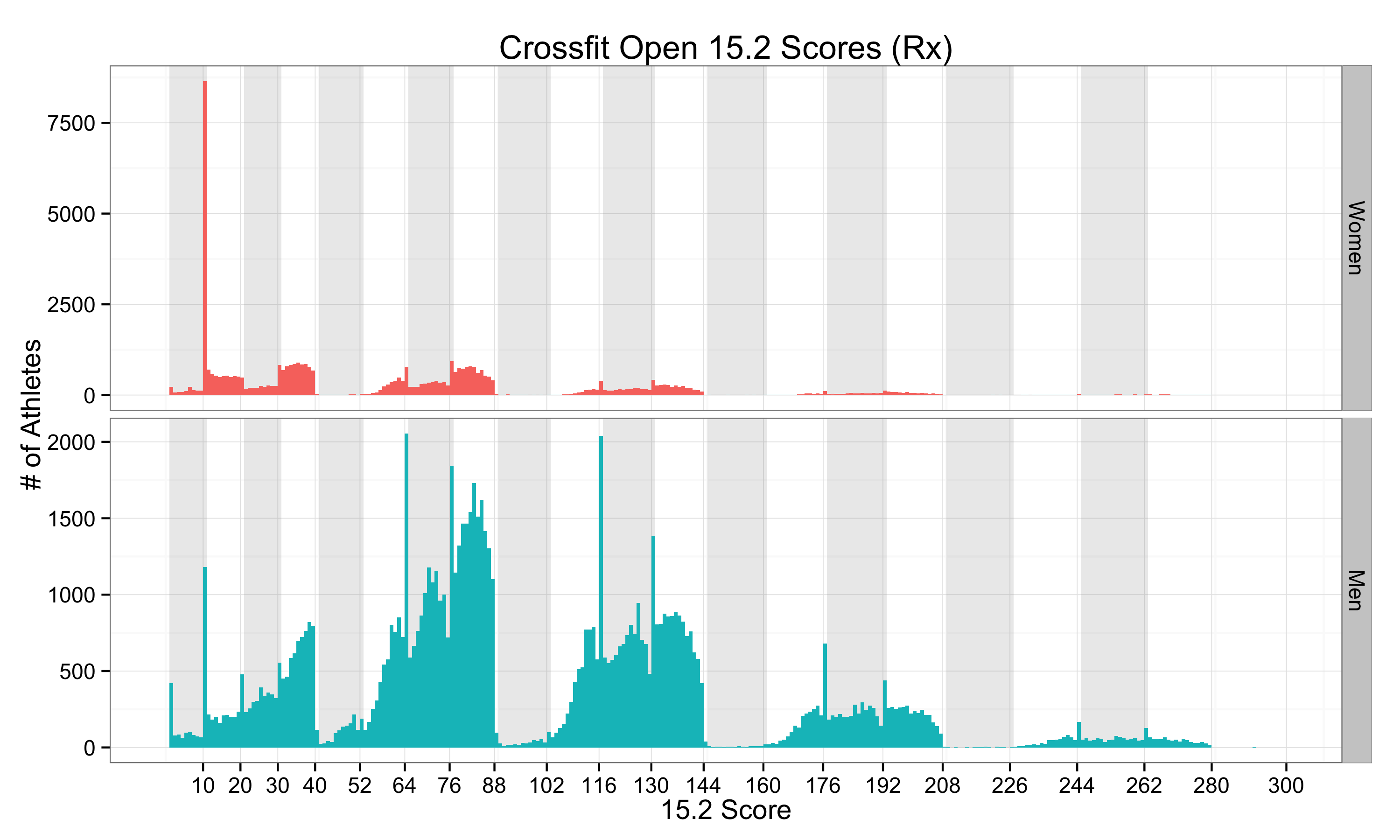 Overall, we see a strikingly similar plot to last year’s 14.2. Once again, chest-to-bar pullups were a show stopper for lots of Rx athletes, nearly 10,000 in all (17% of women and 1% of men). The most popular stopping points after that were at 1.5 and 2.5 rounds even though I tried to coach folks to get 1 extra rep to break ties and get that leaderboard boost.

422 men took a score of 1 to stay on the leaderboard despite what was presumably an injury or absence. A much less popular move with the ladies.

The big holdup at chest-to-bar pullups is an example of the kind of boring-for-many WoD that we were thinking the Scaled division might solve. 27% of athletes opted for the scaled version of 15.1, and you might think the opportunity to avoid chest-to-bars would have driven more demand, but it was pretty constant: 27% overall, 18% of men, 39% of women. 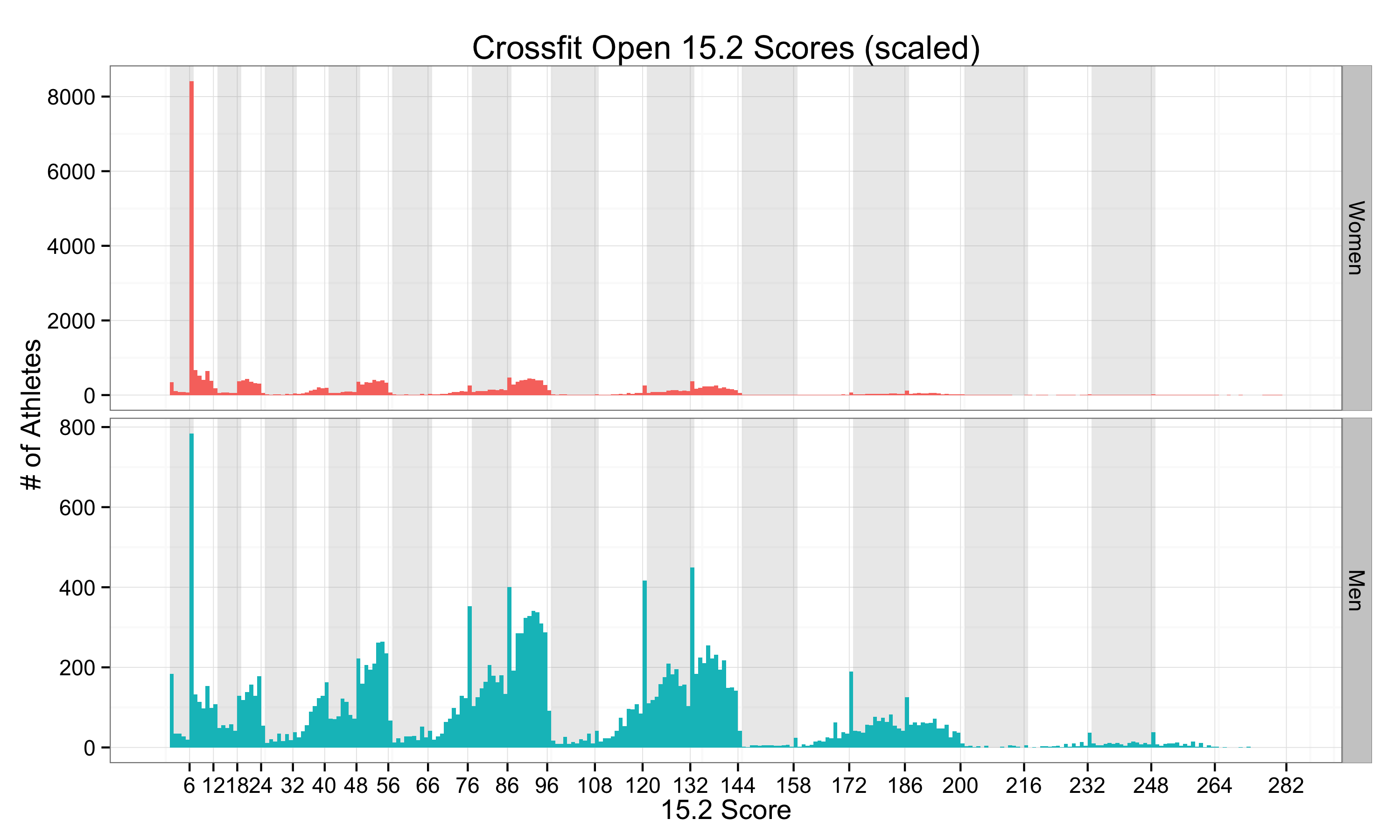 Problem was, apparently, that regular pull-ups aren’t that much easier than chest-to-bar pull-ups, so many athletes opted for the scaled workout, and then got only 6 reps instead of 10. Is this scaled division doing what it’s supposed to do?

One of the most interesting things about 15.2 is that it’s a replay of 14.2 which means we can compare year-over-year performance among returning athletes. The year of experience and maybe some insights on how to game the WOD did make things more competitive than last year. We saw the number of reps required to hit key percentiles increase considerably. 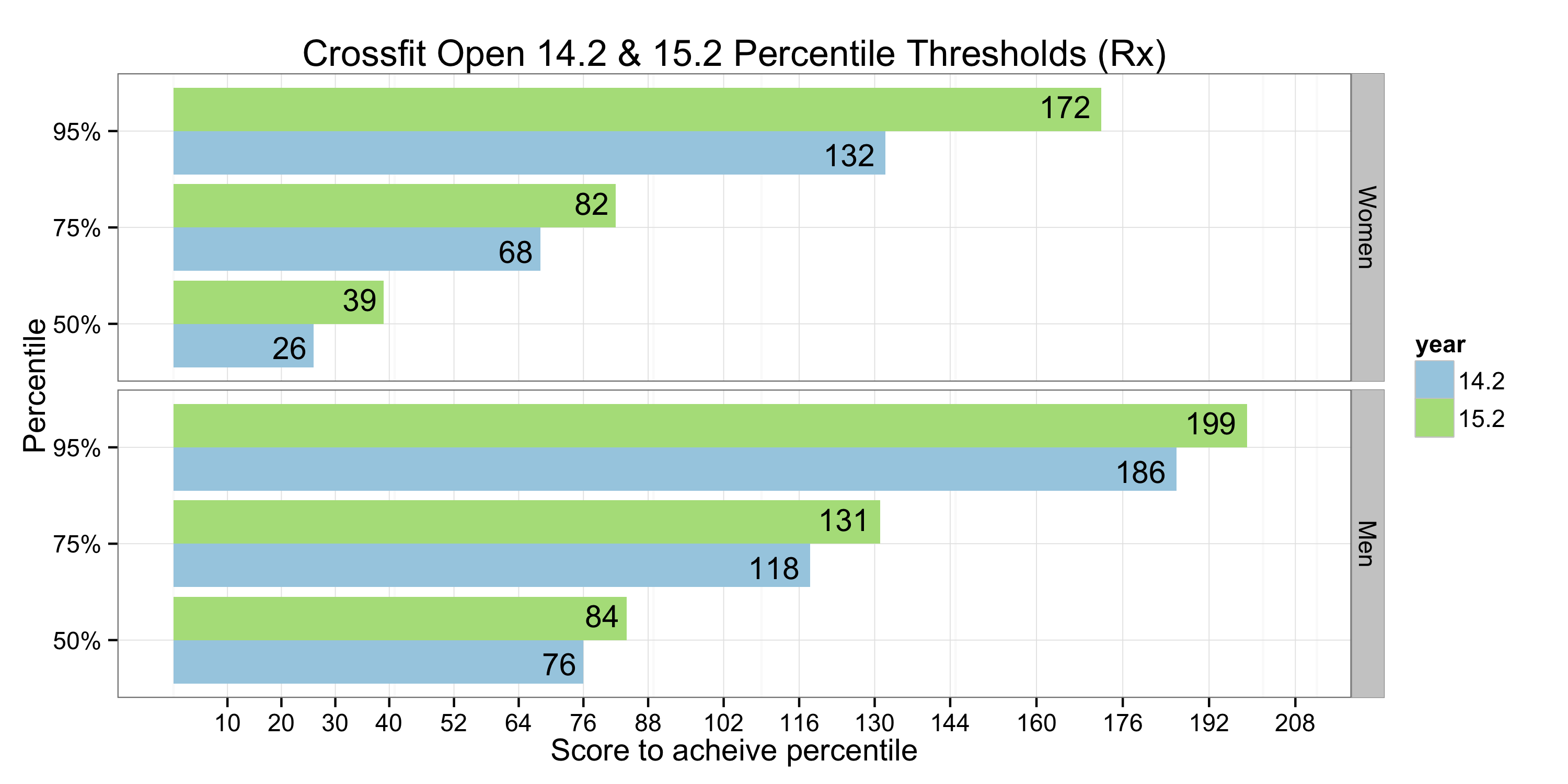 The previous plot shows how scores improved overall from 14.2 to 15.2, but that includes any changes in the population of athletes participating. It makes sense that as CrossFit gets bigger it attracts more elite athletes, but isn’t it all really about personal improvement? The next plot show scores on 14.2 and 15.2 for the 71,854 athletes who completed both WODs at Rx. You can see that most of the points are above the diagonal which means that individual got a higher score this year than last. The topographic-esque lines show how dense (common) certain regions are. The rectangles are caused by the spans of reps in which very few people finish because they just got 3 more minutes. 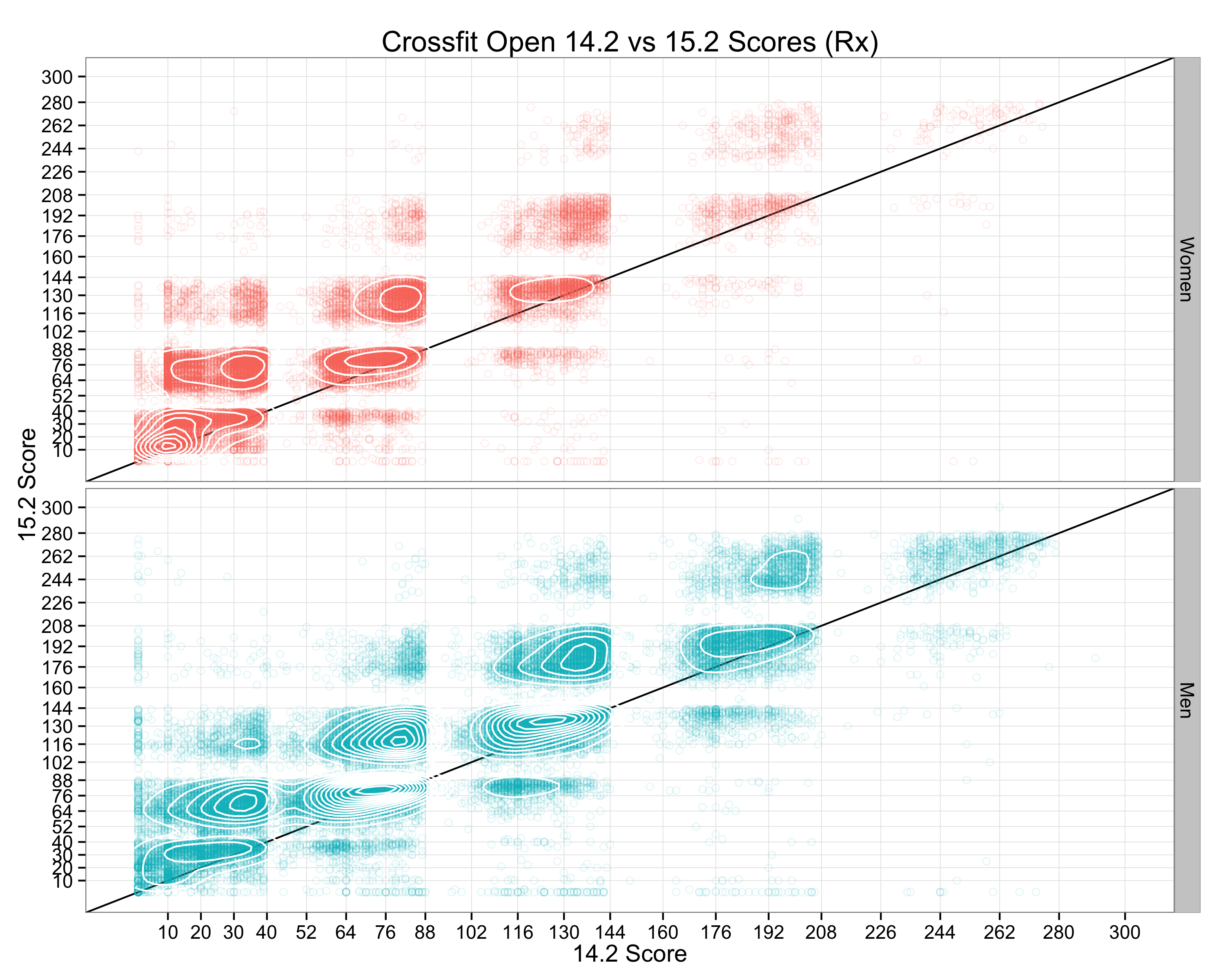 Overall, returning athletes completed 24 more reps than last year. The plot below shows that that is split roughly evenly between people who pushed a little further into the same round (the left hump) and champions who earned 3 more minutes and got ~50 more reps (the right hump). Nice work, 81% of people who improved! (sorry other 19%, everybody has bad days.) 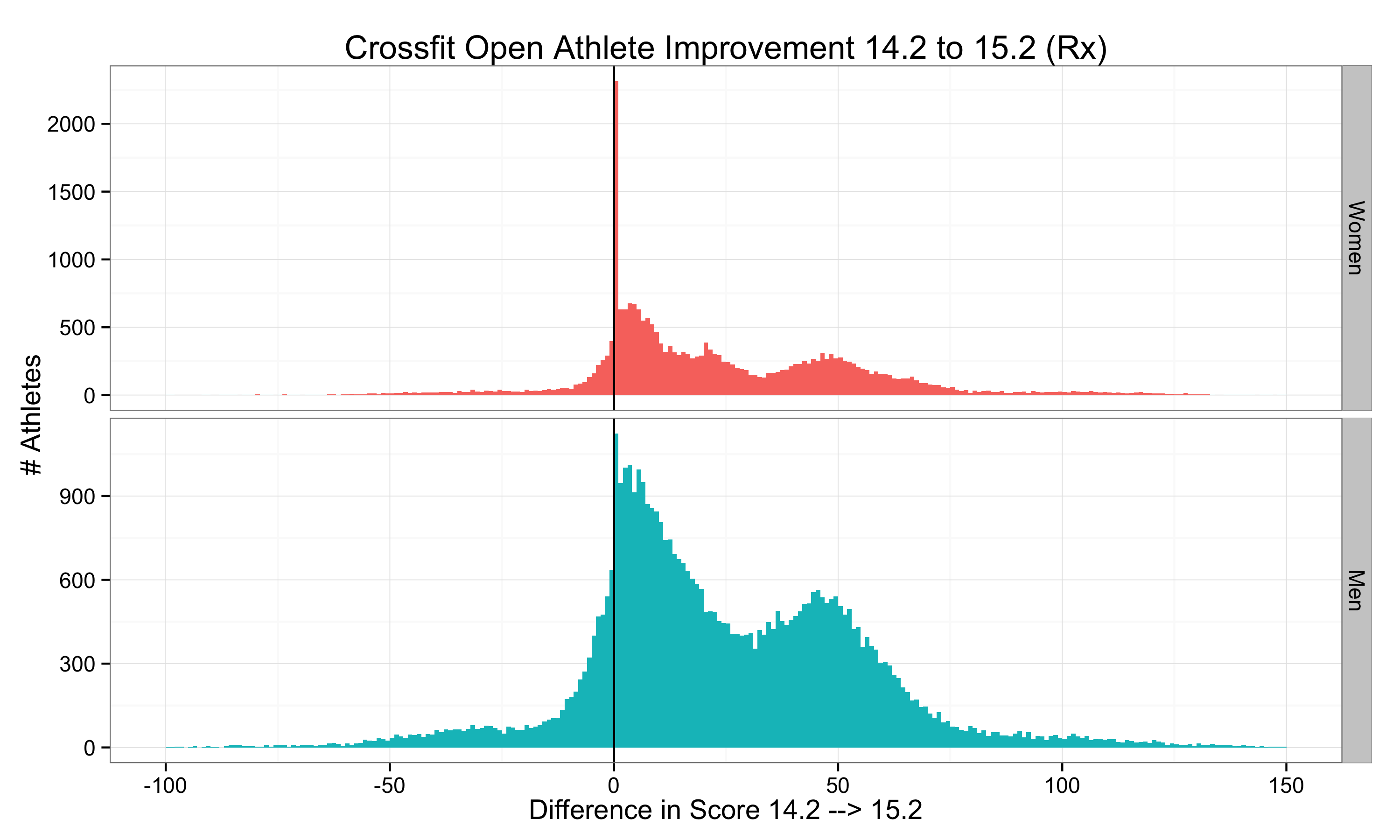 And finally, ready to have some numbers for all those people at your gym who said that WOD was designed to torture [old/tall/heavy/short/young/light] people like them? I’ve got you covered. I merged profile data with scores for all athletes that had provided their stats and completed 15.2 at Rx.

Men peaked in their early 20s while women are pretty solid from 17-27. 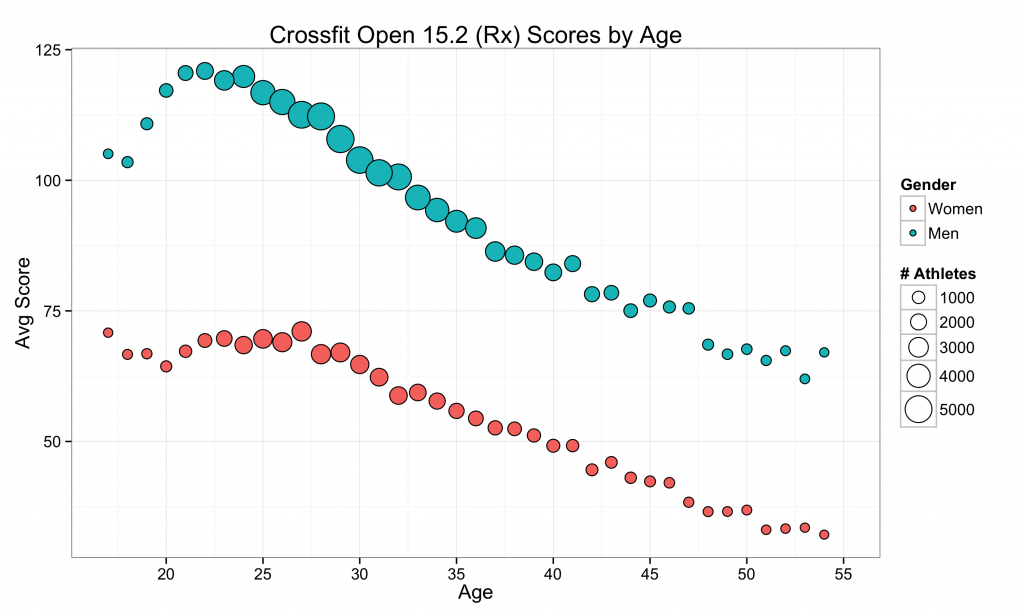 The chest-to-bars definitely put a price on carrying non-functional weight, but in both genders we see that being below average weight was not an advantage overall. 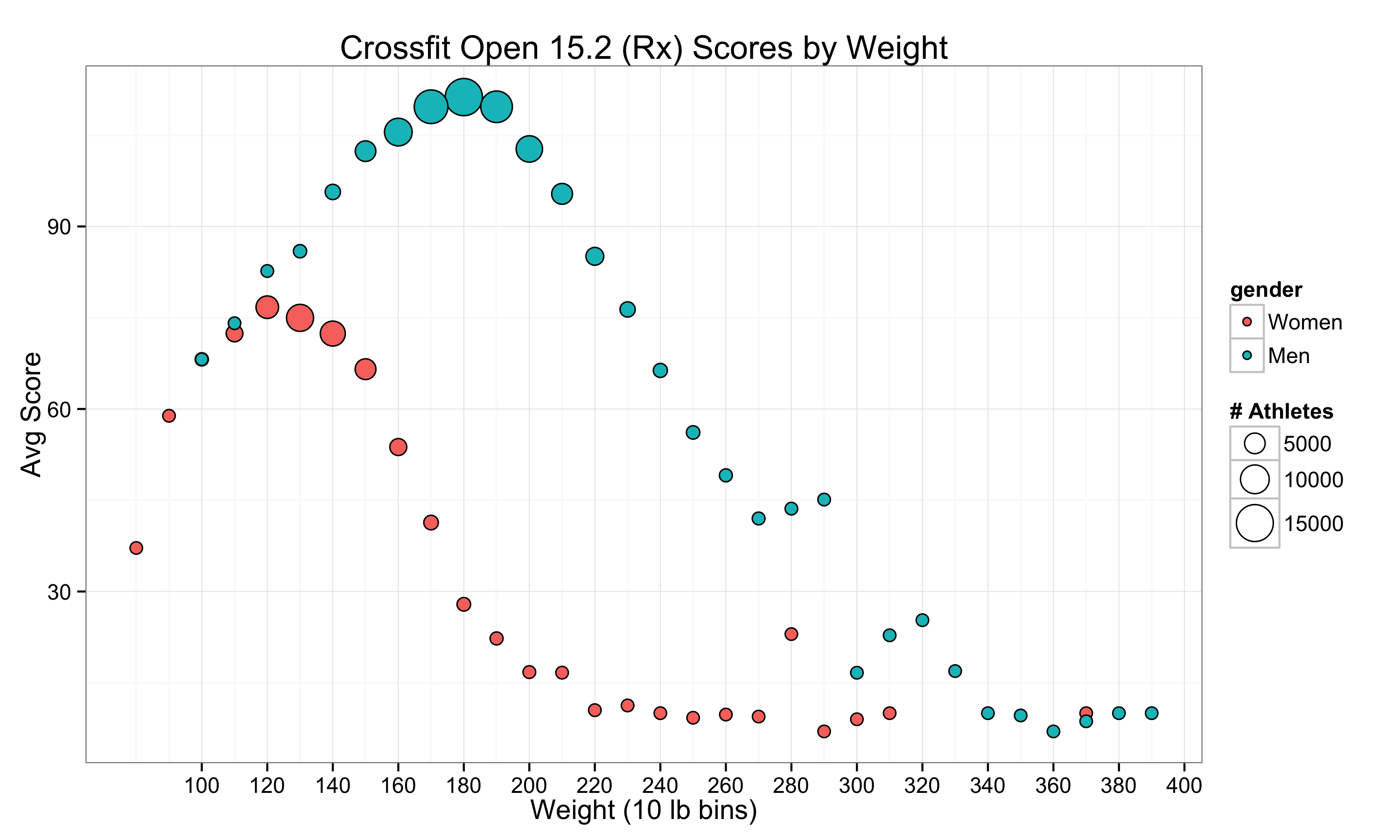 The shorter folks notched a decisive victory in 15.2. For each inch that an athlete was taller than 5’3″, they averaged about 1.75 fewer reps. All of those tall people who ran out of time a couple of reps before the next round may have had a point! 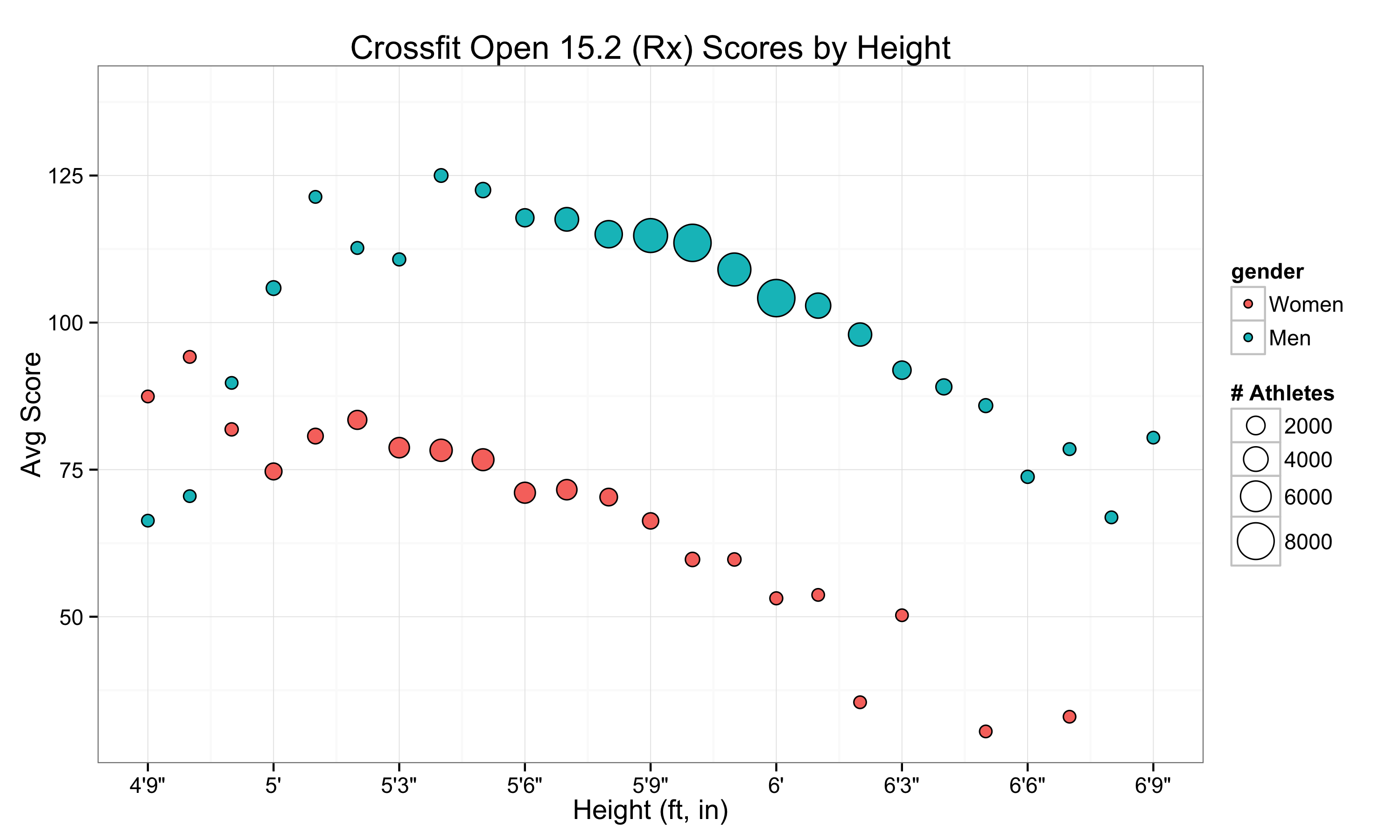